Back in 2010/2011, I asked my hubby what costume he would like to see me make for myself, the twist being that it had to be one that I would never choose on my own.  He chose Emma Frost (cue snickering).  I knew who she was, but I wasn't familiar with her story, so I did my research.  I read up on her storyline, and assessed her many looks.  I immediately vetoed many of them, as I would be extremely self-conscious.  But I found a few that would work, then I found this artwork in an old copy of Wizard: 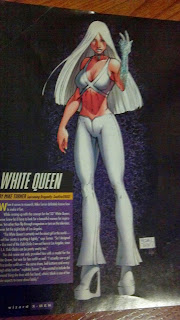 I really loved Michael Turner's artwork, especially the white hair, the partially diamond-formed arm, and that she is wearing PANTS.  So I chose to do a variation of it, and started it by the end of 2010.
First thing first.....I wanted to make a fabulous glove.  Since I'm not going for full-body diamonds, I went with 3 sizes of Swarovski flat-back rhinestones.  Not the cheapest route, but since the rest of the costume would be pretty inexpensive, I decided to throw a lot of time into this most important detail.  I made the glove out of flesh-toned swimsuit lining, since it was the only thing thin enough and stretchy enough, and it wasn't nearly as visible as other fabrics.  With some E-6000 adhesive and a pair of tweezers, I applied each rhinestone, one by one, over the course of several months: 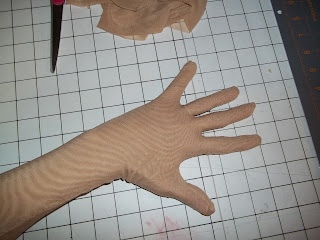 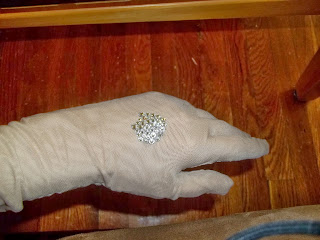 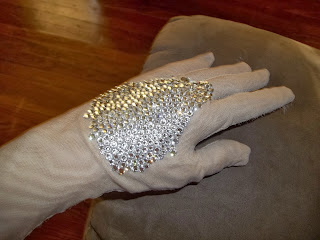 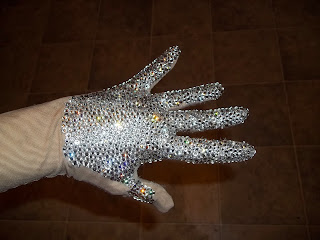 I had to be careful when applying the gems, especially around the knuckles, because if I packed them in to closely in those areas, I wouldn't be able to bend my fingers!  I actually applied the gems while I was wearing the glove, so that spacing would be consistent.
The gems are packed in very closely (on both sides of the hand) until just past the wrist, when they start to fan out and dissipate.  It really catches the light well.
As for the rest of the costume, it's not complicated.  The top is made from a Simplicity bustier pattern, cropped to expose the waist.  I added faux fur and a cape made of one layer of satin and one of chiffon.  The cape is sewn to the bustier so that it doesn't slouch or twist.  The pants are white jersey spandex, and I made the belt from some leftover leather (from my Leia belt) and a purchased black and white X Men buckle.  I found some inexpensive platform boots and a white wig from Cosplay.com.  ﻿ 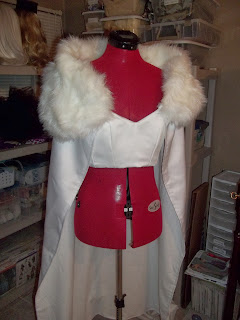 I wore this costume for the first time at DragonCon 2011.  For 2012 I added more Frost.  About 1000 more rhinestones were added, and at this point to go just past the elbow.  I also sprinkled them across my face, shoulders, and ads (on one side), just for a touch of sparkle.  I even was voted 'Best Comic Book Character' in the D*C Hall costume contest, which was pretty cool!  Truth be told, I am still working on it....adding more gems until a majority of the arm is covered.  Since rhinestones aren't cheap, it will have to be an ongoing project.  I didn't even wear it to D*C '13, but hopefully I'll have a bit more Frost for 2014.
So, with some great artwork as inspiration, I was able to come up with a costume I can wear, constantly upgrade, and be comfortable in!
Cassandra and I strike a pose!﻿ 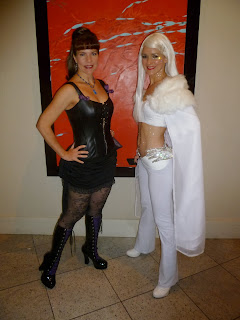 One does not simply dine in a diamond glove! 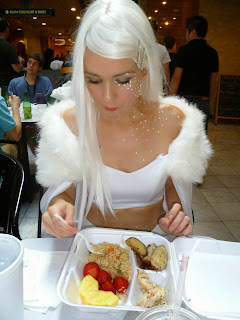 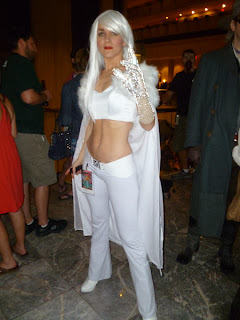