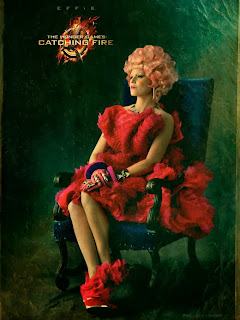 Like many of the costumes I make for myself, something just has to click.  As soon as the Capitol Portraits were revealed I knew I wanted this frilly pink confection, and that it would inevitably be a ton of work.  Lots of yardage.  Lots of fabricating.  Lots of hot pink.  Let's do this.
I'm not going to lie, this was intimidating.  At least with some of my other more ambitious projects I give myself time to work up the guts to make it, or to save up or to find the perfect materials (at least for my budget).  But I gave myself only a few months, since I wanted it completed by Dragon*Con 2013.  Here is the breakdown:
Pattern:  I used the Simplicity poodle skirt pattern for the top and bottom.  The hem was shortened by several inches on bottom, and for the top, I cut out a wedge so that it wouldn't be so full....like cutting a large piece of pie.
Notes: In order to get the top part--the upside-down cone---to stand, I made a boned bustier to go under (Simplicity pattern) so that the top could be pinned to it.  The actual circle...how the top would look if laid flat on the floor...had to be boned as well.  This part is hard to explain, so I'll edit this post later.  I may have some in-progress pictures that will help as well.
Fabrics:  For budget's sake, I used bright pink satin from Joanne's and the corresponding chiffon.  I cannot remember how many yards I actually bought, I kept running out so it was hard to keep up.  I measured 3-4" at the fold of the chiffon, clipped the marking with scissors, and ripped.  And ripped some more...altogether, there is more than 300 yards of ripped chiffon strips sewn into the skirt and top.  I had to start at the bottom and work up...sew on a strip of chiffon, ruffling as I curve it around.  When that row is finished, I would sew the next row less than one inch from the stitch line of the previous ruffle.  Keeping the ruffles close makes them stand out more. 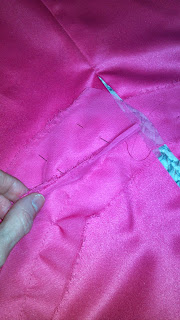 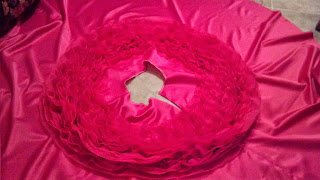 Think of the bottom skirt as a layer cake.  The skirt is 3 layers thick, the bottom layer being the longest.  Ruffles have to be sewn onto all 3 layers.  It takes a while.  I also added a strip of red at the hem of each layer.
The Jewelry:  Effie's jewelry isn't very visible in the portrait, but pictures released later show her jewelry and gloves very well. 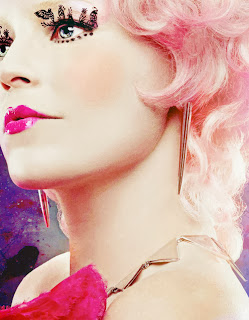 My earrings and necklace are made from some leftover wonderflex I had spared, which I painted silver.  My knuckle-armor rings were outsourced...ebay!
The gloves were tons of fun.  I found some cheap elbow-length hot pink lace gloves on ebay.  I cut them down to wrist length, used the spare lace to make a ruffle, then beaded them.  The purple ruffle was made using grosgrain ribbon, but only after watching some video tutorial on Elizabethan ruff making.  I may remake them one day, but for a first shot, I'm pretty happy with how they turned out.
The belt is made of a piece of silver vinyl you get cut by the yard, and the buckle is made from wonderflex.  I was able to get the rounded look by forming the soft wonderflex around the top of a domed sippy cup;) 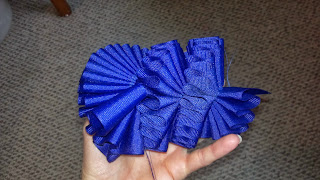 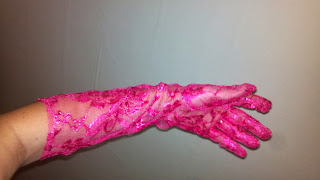 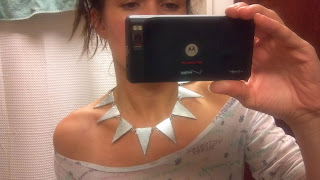 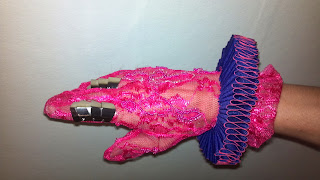 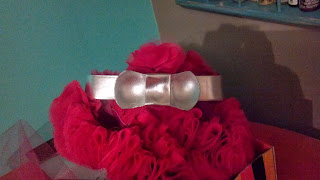 The shoes:  I found these knock-off McQueens on one of those websites that sells crazy knockoff shoes.  To fluff them up, I cut out thousands of little circles of chiffon and tulle (layered of course!), folded them into quarters, sewed them together, then glued them to the shoe.  I originally made a cover to sew them on to, but it looked horrible when I put it on the shoe, so I just decided to stick them directly to the shoe.  Much better. 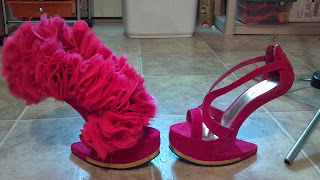 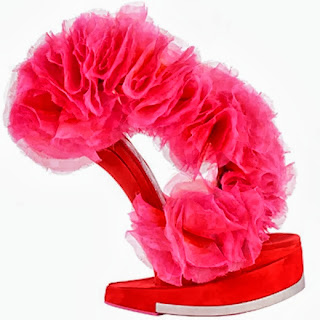 The wig:  I bought a "chaperone" wig from ebay, which was not horrible considering it was cheap.  But I could not achieve the 'baby bangs' look from the pics.  I was able to spray it pink and style it.  It's ok. 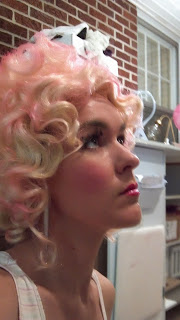 The Lashes: These are fun...the little laser-cut paper lashes in the shape of little birds.  Ebay, of course.  They are reasonably accurate to the pictures, but I did cut them up and apply each bird individually, because they were way too long and thick to go across my lashline. 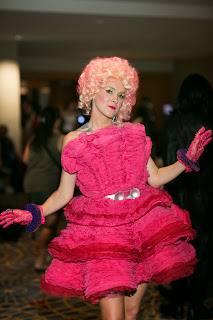 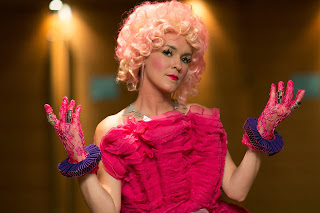 Me and the Sams as the Catching Fire: Capitol Portrait Group 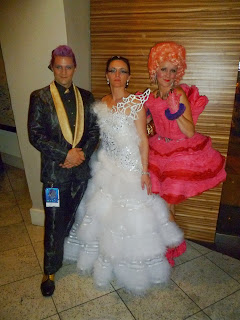 Still to be done!!!!!: I am currently working on the gunmetal silver cuffs which are visible in the portrait, but difficult to make out.  They look much clearer here: 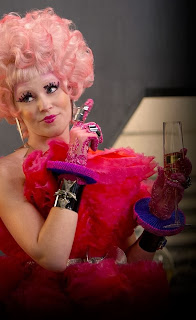 I also need to add some red ruffles into the top half and work with the wig more.
Update....a few pics from Wizard World ComicCon Nashville: 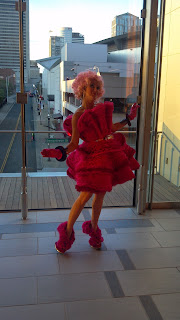 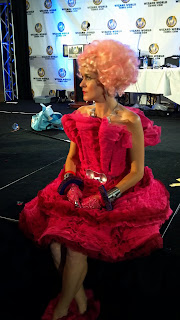 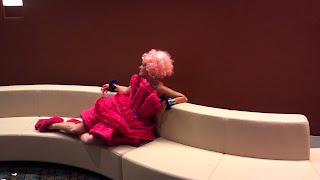